Western Animation / Phineas and Ferb the Movie: Across the 2nd Dimension 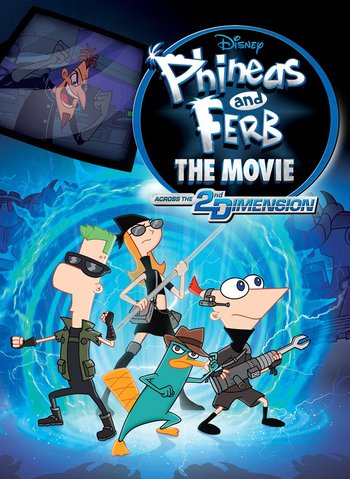 An adventure so big, one dimension isn't enough.
"This is gonna be the best day ever!"
— Phineas

When Phineas, Ferb, and Perry follow Dr. Doofenshmirtz through his "Otherdimensionator", they find themselves in an alternate universe where a second, truly evil Doof rules over his Tri-state Area with an army of iron-fisted robots. To save his friends from certain doom, Perry makes the ultimate sacrifice by revealing his secret identity as Agent P. Phineas and Ferb escape, meet their 2nd dimension selves, and begin their own mission to rescue Perry. So begins an epic battle as our heroes try to save their home from the clutches of Evil Dr. Doof and his sidekick Platyborg. Will Evil Doof succeed and achieve dual world domination? Will Candace finally bust her brothers? Hell if we know (though we do know how that last one will turn out), but watch it to find out.

A video game adaption was released August 2nd, as well as a soundtrack. Plus, an episode sequel was aired on 2014.

This TV movie includes examples of:

To ensure they keep Perry, Phineas, Ferb and their friends have to get their memories erased of the whole day by Doofenshmirtz's Amnesia-inator.

To ensure they keep Perry, Phineas, Ferb and their friends have to get their memories erased of the whole day by Doofenshmirtz's Amnesia-inator.