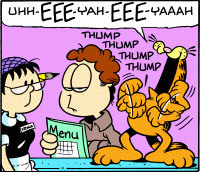 One way of demonstrating a being's wildness is for them to beat their chest while yelling. This might be combined with a Mighty Roar.

This is most often done by gorillas (killer or otherwise). When a character that is not a gorilla does it, it is usually either to show that they feel as strong and mighty as a gorilla, or that they are as brutish and uncultured as an ape. It also may be Played for Laughs, when it is done by a small and/or weak character.

Two Stock Shout Outs often include chest pounding. One is a literal Shout Out to Tarzan, where the character lets out the ape-man's Signature Roar while beating his chest; the other is "King Kong" Climb, where the creature on top of the building (which is often a King Kong Copy) pounds its chest to recreate the iconic scene from King Kong (1933).

In reality, gorillas may pound their chest for different purposes: as a display of dominance, as a release of stress, to warn neighbouring gorilla groups about their presence, and most notably, it is one of the nine phases of the ritualized fight between Silverbacks. Juvenile gorillas also beat their chests playfully. Also, it is usually inaccurately portrayed in media: real gorillas more often do it with open or cupped hands rather than clenched fists, which produces a sound that's less "thumping" and more "popping." Furthermore, they seldom vocalize while beating their chest, and when they do, it's more of a hooting or whinnying sound

than a Mighty Roar.

It might be part of a Victory Pose of a savage, brutish fighter, especially when combined with a Victorious Roar. Compare Stop Hitting Yourself where it's someone else who moved the hands of the victim to hit themself, and Macho Masochism, when the character hurts themself in a much more painful way to show off their toughness. Contrast Breast Attack, when a character hits someone else's chest in a fight.

Tiago who is the only son of Blu and Jewel is a rather rambunctious parrot as shown when he beats his chest in excitement about going to a wild place like the Amazon.

Tiago who is the only son of Blu and Jewel is a rather rambunctious parrot as shown when he beats his chest in excitement about going to a wild place like the Amazon.