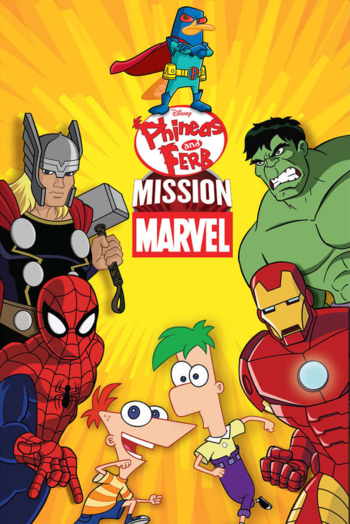 A special crossover episode of Phineas and Ferb in its fourth season with the Marvel universe. It first aired on Disney Channel on August 16, 2013.
Advertisement:

The plot goes that Phineas, Ferb and their friends are literally space surfing along a meteor shower and head back to their customized space station. At the same time Perry is battling Doofenshmirtz as per usual and breaks up his latest -inator which coincidentally happens to take away superpowers. In the midst of their battle, a stray shot manages to fire off before the machine is destroyed. And yet again at the same time in New York, Spider-Man, Hulk, Iron Man and Thor are battling against Red Skull, Venom, Whiplash and M.O.D.O.K.. Just as they're about to beat them, the ray bounces off the space station and onto the heroes, taking away their powers and allowing the villains to escape.

After the heroes regroup on the S.H.I.E.L.D carrier, Nick Fury manages to track the ray back to Danville and Phineas and Ferb's house. So the four heroes head to the pair in hopes they can restore their powers. At the same time, the villains likewise manage to track the source of the ray to Doofenshmirtz (thanks to Doofenshmirtz bragging about it on the internet) in the hopes of gaining the heroes' powers for themselves.

Can Phineas and Ferb save the day? Or will the villains actually take advantage of this opportunity and manage to take over the world?