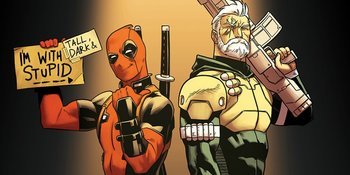 Note that “wise guy” in this case doesn’t mean those kind of wiseguys. Although the wise guy could also be an actual wiseguy.

See also Boke and Tsukkomi Routine, where a foolish character sets up the jokes for a straight man to correct, often violently, and Bathos, where mundane and wacky elements, and not just characters, are contrasted with each other for comedic effect. Compare Smart Jerk and Nice Moron, a similar comic contrast pair where no one character is the straight man. Often paired with Fat and Skinny; usually, the skinny one's the straight man but not always. Sister trope to Ham and Deadpan Duo and Gleeful and Grumpy Pairing.