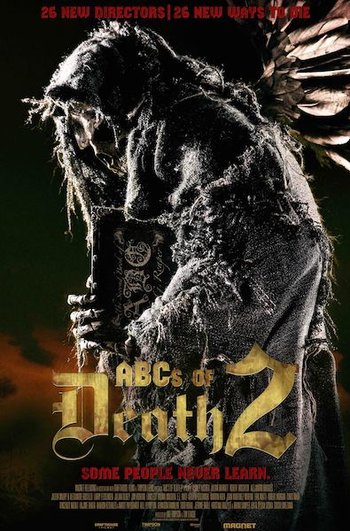 A first sequel to 2012 anthology horror film The ABCs of Death. Like the first film, it consists of 26 shorts, directed by filmmakers from around the world, and each named for a letter of the alphabet and dealing with the subject of death. The title of each segment is only shown after it has ended, providing a guessing game for the viewer as to what word the short's designated letter stands for.

Each segment provides examples of:

A is for Amateur

From the USA. Directed by E.L. Katz (Cheap Thrills). It's about a hitman who was given an assignment to kill a drug dealer. He imagines a perfect execution of sneaking through air vents with the plan to enter the room via the dealer's penthouse and assassinate all the targets. However, the reality says it differently in the worst way.
Advertisement:

B is for Badger

From the UK. Directed by Julian Barrett (of The Mighty Boosh). It's about a wildlife documentary filmmaker named Peter (played by Barrett) documenting the endangerment of badgers caused by a local power plant nearby.

C is for Capital Punishment

From the UK. Directed by Julian Gilbey (A Lonely Place to Die). It's about a town which handles local matters, including law and crimes, calling for the execution of a man for the supposed murder of a teenage girl. The man tries to reason with the locals, proclaiming his innocence and suggesting they call the police to deal with the matter. The locals promise to call the police if he confesses or face execution if he does otherwise. After confessing, however, the locals plan to execute him.

D is for Deloused

A Stop Motion Animation short directed by UK-based animator Robert Morgan. It's about a large bug that helps an executed man get revenge on his ghoulish killers.

E is for Equilibrium

From Cuba. Directed by Alejandro Brugués (Juan of the Dead). It's about two castaways who have their friendship tested when a beautiful woman washes ashore.

F is for Falling

From Israel. Directed by Aharon Keshales and Navot Papushado (Big Bad Wolves). It's about an Israeli female paratrooper who got caught in a tree after jumping from a plane and is hanging by her parachute. An Arab boy discovers her hanging there and aims his rifle at her to kill her.

G is for Granddad

From the UK. Directed by Jim Hosking. It's about a rude young man living with his grandfather who is exasperated by his grandfather's retro taste and style. As he lays down in his bed, there is a noise beneath the mattress.

H is for Head Game

From the USA. Directed by Bill Plympton. This hand drawn animated segment is about a man and woman kissing, which turns into a surreal power struggle.

I is for Invincible

From the Philippines. Directed by Erik Matti (On the Job, BuyBust). It's about a family that tries to kill the matriarch for her inheritance, which is composed of an ornate stone that makes its host immortal, along with cash and a beach house.

J is for Jesus

K is for Knell

From Lithuania. Directed by Kristina Buozyte and Bruno Samper (Vanishing Waves). It's about a woman who sees a big, floating sphere of black liquid that causes people from another apartment to kill each other. The black liquid is now going after the woman who is alone in her own home.

L is for Legacy

From Nigeria. Directed by Nollywood icon Lancelot Imasuen. It's about an African tribe's sacrificial ritual that goes horribly wrong, which summons a demonic creature that attacks several villagers.

M is for Masticate

From the USA. Directed by Robert Boocheck. It was a winner for the 26th director contest. Shot mostly in slow motion, it's about a large man with strange looking eyes who runs in his underwear down a street while knocking down several bystanders and attempts to eat someone.

N is for Nexus

From the USA. Directed by Larry Fessenden (Wendigo). It's a Hyperlink Story sets in New York City during Halloween. It involves 1) a man dressed up as a Frankenstein monster in a hurry to meet his girlfriend, who dressed up as the Bride of Frankenstein, 2) a taxi driver trying to solve a crossword puzzle while driving to his passenger's destination, and 3) the man's girlfriend waiting for him.

O is for Ochlocracy (mob rule)

From Japan. Directed by Hajime Ohata (Henge). It takes place in a post-apocalyptic society where zombies are the ruling class and the human survivors are put on trial for killing zombies for survival.

From the USA. Directed by Todd Rohal (Nature Calls). It is about three prisoners who encounter a strange man and a baby.

Q is for Questionnaire

From the USA. Directed by documentarian Rodney Ascher (Room 237, a documentary about conspiracy theories surrounding the movie The Shining). It is about a man takes an intelligence test on the street, juxtaposed with footage of his brain being forcibly removed.

R is for Roulette

From Austria. Directed by Marvin Kren (Blutgletscher). It is about two men and a woman who play Russian roulette while hidden in a basement.

S is for Split

From Spain, done in English. Directed by Juan Martinez Moreno. All done in a Split Screen format and is a home invasion thriller about a woman attacked in her home by an intruder while her husband is in France.

U is for Utopia

From Canada. Directed by Vincenzo Natali (Cube). The segment takes place in a world where everyone is perfectly beautiful and no ugly people are among the crowd.

V is for Vacation

From Canada. Directed by Jerome Sable (Stage Fright). It is a Found Footage segment about a man who is on vacation overseas with his best friend as he video chats with his girlfriend at the hotel balcony. Behind the curtain, the man and his friend have been doing a wild alcohol and drug-fueled binge and have sex with mother and daughter prostitutes.

W is for Wish

From Canada. Directed by Steven Kostanski (Manborg), the special effect artist from Canadian filmmaking team Astron6. It is a deconstruction of children's action figure commercials. It starts out looking like a TV commercial for a toy called Champions of Zorb, and one of the kids playing with the figures wishes they could help the main hero. They're both transported to the fantasy world of Zorb, where the bloody war is happening.

X is for Xylophone

From France. Directed by Julien Maury and Alexandre Bustillo (Inside). It is about a grandmother (played by Maury and Bustillo's regular Beatrice Dalle) who is emotionally affected by her grandchild's xylophone.

Y is for Youth

From Japan. Directed by nationally renowned special makeup artist Soichi Umezawa in his directorial debut. It is about a teenage girl who violently fantasizes about her negligent parents' death.

Z is for Zygote

From Canada. Directed by Chris Nash, who submitted his entry for the previous 26th director contest called T is for Thread. It is about a pregnant woman who has been staving off birth for 13 years and is living with a 13-year-old inside her uterus after her husband left years ago.