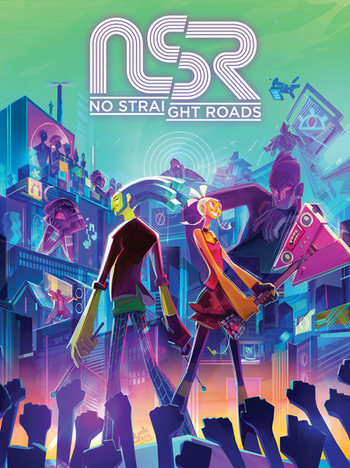 Start a rock band... end the EDM empire.
Mayday: We're not stopping 'til we claim our fame!
Zuke: And bring change to the system.
Mayday: Yeah, that too.
Advertisement:

Vinyl City. A groovy, colorful, rocking place for music and artists everywhere literally powered by music, where you are free to express yourself however you wish—until the oppressive record label No Straight Roads (NSR for short) came, taking over the city with their vast financial resources and influence, doing everything it can to restrict and crush all other forms of music except for their artists and EDM.

Enter Bunk Bed Junction, an indie rock-duo comprising guitarist/singer "Mayday" and drummer "Zuke." Outraged and frustrated by NSR's predatory practices, they vow to crash their megastars' concerts and performances and defeat them, take down their CEO, Tatiana, and free their city and its people with The Power of Rock!

No Straight Roads is a rhythm-based action-adventure video game developed by Malaysian independent studio Metronomik and published by Sold Out. The core of the gameplay revolves around its soundtrack, enemies, and attacks all timed to the beat of the music, and the protagonists fighting them by firing notes like bullets, transforming props and objects into machine-guns and useful devices by playing epic solos, or simply smacking them with their instrument.

It released for the PlayStation 4, Xbox One, Nintendo Switch, and PC via Epic Games Store (as a timed exclusive) on August 25th, 2020. On the first anniversary of the game's initial release, it was announced that the game would receive an Updated Re-release on Steam as No Straight Roads: Encore Edition, which released on October 21st, 2021.