Series / Homicide: Life on the Street 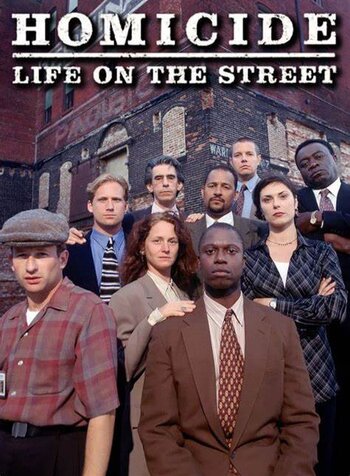 "You go when you're supposed to go, and everything else is homicide."

Before The Wire - hell, even before NYPD Blue - there was Homicide: Life On The Street. Based on the factual book Homicide: A Year On the Killing Streets by Baltimore Sun journalist David Simon and airing on NBC, the series charted the lives of a team of homicide detectives in Baltimore, both on and off the clock. The show actually hung under the threat of cancellation after the first, but two Emmy nominations and the popularity of fellow soapy police show NYPD Blue got it renewed for a second season of just four episodes, making it the shortest season ever commissioned by a US network.

Over time, the show managed to build a comfortable - if not spectacular - audience, and traded in several of the older, less conventionally attractive cast members for young studs. Still, the series continued to achieve critical acclaim for what was then considered to be a realistic look at police life, with cases going unsolved, killers getting off the hook and officers having very real character flaws. It finished after seven seasons in 1999, with a TV movie

wrapping up the remaining plot threads in 2000. It is generally considered to be the high water mark for Police Procedural shows, at least until David Simon returned with another Baltimore-based cop show, HBO's The Wire. The realism stems in large part from Simon's experience writing his non-fiction book about a year embedded with BPD Homicide; viewers familiar with the book will have fun trying to work out which scenes are ripped from its pages (TOW has a list of the book's notable cases

The character of Detective John Munch proved so popular that the character - always played by actor Richard Belzer - went on to make guest appearances in two Law & Order series (including a French spin-off), The X-Files, The Beat, Arrested Development, The Wire and even Sesame Street. Following the end of Homicide, Munch appeared as a regular character on Law & Order: Special Victims Unit from its premiere until his retirement early in the 15th season, and has made occasional appearances since.

The show was created by Paul Attanasio and was produced by Baltimore Pictures, the production company of executive producer Barry Levinson, initially alongside Reeves Entertainment. After the first season, however, Reeves Entertainment's parent company, Thames Television, filed for chapter 11 bankruptcy protection, and NBC assumed co-production duties.