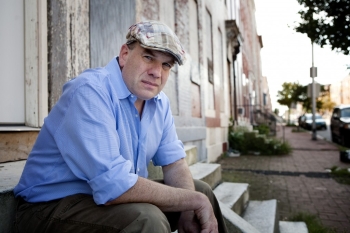 David Judah Simon (born February 9, 1960) is a Baltimore-based author, journalist and writer-producer of television specializing in criminal justice and urban issues. Born in Washington, he came north to Baltimore after graduating from the University of Maryland to work as a police reporter at the Baltimore Sun. In 1988, after four years on the crime beat, he took a leave of absence from the newspaper in order to spend a year observing one shift of detectives in the homicide unit of the Baltimore Police Department. He used the experience to write Homicide: A Year on the Killing Streets.

Published in 1991, the book won the 1992 Edgar Award in the Best Fact Crime category and became the basis for the NBC series Homicide: Life on the Street, which was broadcast from 1993 to 1999. Simon worked as a writer, and later as a producer on the award-winning drama.

In 1993, Simon took a second leave from the Baltimore Sun to research and write The Corner: A Year in the Life of an Inner-City Neighborhood. Published in 1997 and co-authored with Edward Burns, the true account of life in a West Baltimore community dominated by an open-air drug market was named a Notable Book of the Year by the New York Times.

Simon then co-wrote and produced The Corner as a six-hour miniseries for HBO. That production, which aired in 2000, won an Emmy as the year's best miniseries. Simon and David Mills also won the Emmy for best writing in a movie or miniseries. For his writing on Homicide, Simon has won the WGA Award for best writing in an episodic drama, as well as the Humanitas Award in the same category.

Having left the Baltimore Sun in 1995, Simon continues to work as a freelance journalist and author, writing for publications as varied as The Washington Post, The New Republic and Details magazine.

In 2002, he created The Wire, a simultaneous love-letter and hateful screed to Baltimore, broadcast on HBO for five seasons and also drawing inspiration from his book Homicide. The show didn't have high ratings, but it was cited by many critics as one of the best television series ever. He followed this up with Generation Kill, which follows a group of US Recon Marines in Iraq in 2003. Yet another show, Treme, set in the eponymous neighborhood of New Orleans and focusing on the community of musicians who live there (and presumably how they keep going after Hurricane Katrina), started airing on HBO in 2010. His experience on the show caused him to amend his will to request a second line funeral

, which he says will likely be the only one his chosen cemetery ever sees.

He has a blog