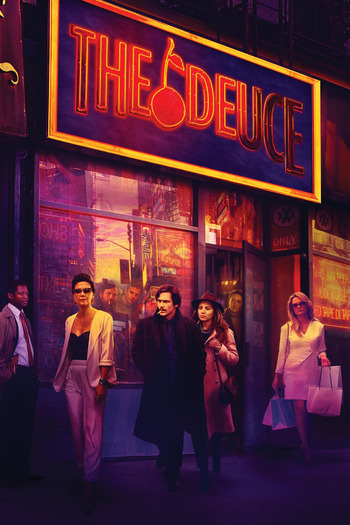 The Deuce is an HBO series which made its debut on September 10, 2017 and ran for three seasons and 25 episodes, concluding on October 28, 2019. It is yet another brainchild of David Simon, of The Wire and Treme fame.

In 1971, New York City's 42nd Street, nicknamed the "Deuce", was the cultural center of American grindhouse theaters, which spawned an entire subculture. Much like Simon's other dramas, the show has no one protagonist and follows various characters as they try to navigate the crime and grime of The Big Rotten Apple. The characters given the most focus are Vincent (James Franco) and Frankie Martino (James Franco), twin brothers and frontmen for The Mafia in Times Square; Eileen "Candy" Merrell (Maggie Gyllenhaal), a sex worker who is interested in making money in porn; and Larry Brown (Gbenga Akinnagbe), an intimidating but conflicted pimp.

The Deuce contains examples of: