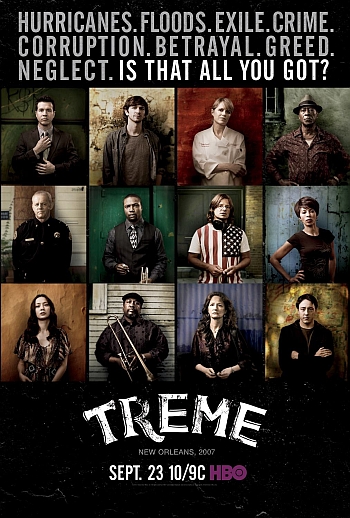 David Simon's followup to The Wire which garnered just as much critical love right off the bat.

Beginning three months after Hurricane Katrina hit New Orleans, the series follows several residents who are struggling to put their lives back on track, particularly centered around the titular neighborhood (which is pronounced "tre-may"). Ladonna Williams tries to keep her bar running while searching for her brother who has been missing since the hurricane. Her ex-husband Antoine Bastiste plays his trombone in any gig he can find to stave off poverty for his new family. Civil rights lawyer Toni Bernette helps Ladonna in her search, while her husband Creighton vents his anger at how the crisis was mismanaged at anyone who crosses his path. Alternative DJ Davis McAlary is enraged at the changes his station has been forced to make, and his "friend with benefits" Janette Desautel runs a high class restaurant on dwindling funds. Albert Lambreaux is driven to return to town to resume his position as a Mardi Gras Indian Chief, but faces opposition from both members of his tribe and his own children. Street violinist Annie faces the dissolution of her relationship when her boyfriend Sonny becomes envious of her superior talent.

Season Two skips ahead several months and begins on All Saints' Day 2006. More than a year after Katrina, more and more people are returning, but unfortunately this includes a good deal of criminals, plus one new major character in Nelson Hildalgo, a Texan with a very vaguely defined job who's looking to make some money off the rebuilding efforts.

Despite the show sharing several similarities with Simon's previous opus (wide-ranging cast of characters, brutally realistic stories, and a complete lack of artificial music), it distinguishes itself with a far more optimistic tone. Despite the bleak circumstances for many of the characters, they mostly hold onto hope that things can improve and the city can regain its former greatness.

Has a Character Sheet that needs more love.