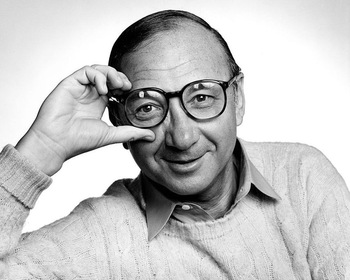 "Everyone thinks they can write a play; you just write down what happened to you. But the art of it is drawing from all the moments of your life."
Advertisement:

Marvin Neil Simon (July 4, 1927 – August 6, 2018) was an American playwright and screenwriter, and one of the leading figures of late-20th-century American theatre.

He grew up in New York City during The Great Depression; both that time and that place were strong influences on his plays. After serving in the military he wrote for radio and television. Come Blow Your Horn was his first Broadway play, staged in 1961. He followed that up with Barefoot in the Park and The Odd Couple, both big hits which were adapted into Hollywood films—The Odd Couple actually became a franchise when it was further adapted into several television sitcoms.

Mostly he wrote his own stories, but occasionally he adapted other source material, such as the play Sweet Charity, which was an adaptation of Federico Fellini movie Nights of Cabiria. Neil Simon plays were a fixture of Broadway in the 1960s, '70s, and '80s. In the latter decade he began to mine his own life for material, writing semi-autobiographical plays like Biloxi Blues and the Pulitzer Prize-winning Lost in Yonkers.

Simon adapted several of his plays for the screen. He also wrote a few original screenplays, such as The Out-of-Towners, Murder by Death, and The Goodbye Girl; the latter got a Musical Screen-to-Stage Adaptation. His last play, Rose's Dilemma, ran in 2003.