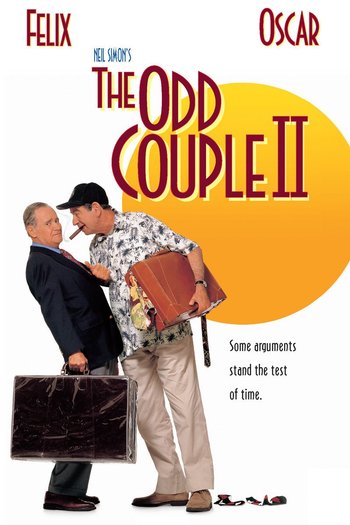 A 1998 comedy film directed by Howard Deutch and starring Jack Lemmon and Walter Matthau as Felix Ungar and Oscar Madison, respectively. It is a sequel to 1968's The Odd Couple, starring the same actors. Neil Simon, who'd written the screenplay for the earlier film (as well as the 1965 play on which it was based), wrote and produced.

The film begins with Oscar and Felix, who haven't seen each other in years, finding out that Oscar's son is marrying Felix's daughter, and the wedding is in less than a week. The rest of the plot revolves Felix and Oscar traveling to California trying to make their way to the wedding together, which of course evolves into a wild, wacky adventure which makes it seem like they will never make it there. Hilarity ensues.

While it enjoyed neither the critical nor commercial success of the original film (or even Lemmon and Matthau's Grumpy Old Men films from a few years earlier), it is acknowledged as a somewhat enjoyable movie if watched just for laughs.