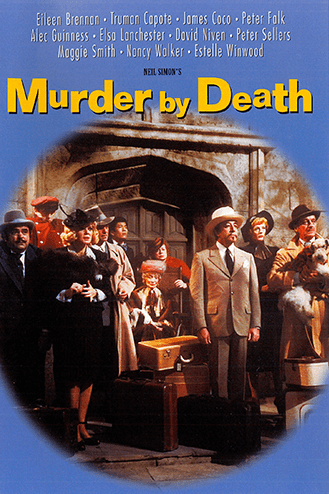 "You are cordially invited to Dinner and a Murder."
Advertisement:

Murder by Death is an American comedy-mystery film released in 1976. Written by Neil Simon and directed by Robert Moore, the film employs a star-studded cast to parody the Mystery Fiction genre in general as well as several famous writers (chiefly Agatha Christie) and characters in particular.

Five of the world's greatest detectives are each accompanied by an associate to a dinner party held by the enigmatic multi-millionaire Lionel Twain (Truman Capote), who challenges the whole group to solve a murder that will take place at midnight. If any of the detectives can figure out who committed the murder, they will earn the reputation as the single greatest detective in the world — and win a million dollars, to boot. Once the murder occurs, each detective stumbles around trying to gather clues that will help them solve the case, and Hilarity Ensues as they all compete for the ultimate bragging rights (and all that cash).

The detectives themselves are pastiches based on various famous fictional sleuths: