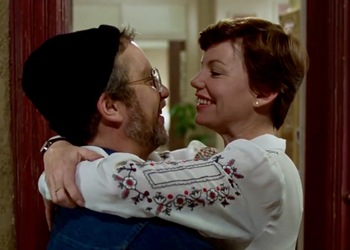 "You love to love someone, but the minute they start taking the initiative like I did last night that scares the pants off you."
— Elliot
Advertisement:

The Goodbye Girl is a 1977 Romantic Comedy film directed by Herbert Ross and written by Neil Simon, starring Richard Dreyfuss and Marsha Mason.

Paula McFadden (Mason), a 33-year-old semi-retired dancer with a ten-year-old daughter named Lucy (Quinn Cummings), has to become un-retired when her actor boyfriend Tony leaves town, breaking up with her via a "Dear John" note. Even worse is that their shared New York apartment was leased under Tony's name, and he has sub-let it to another actor, Elliot Garfield (Dreyfuss), who's arrived from Chicago to star in a play. Paula is horrified to have a stranger moving in to her apartment, and an actor at that, but Elliot has a lease and a key, so they grudgingly work out an arrangement in which they will share the apartment.

One of the rare films for which Neil Simon wrote an original screenplay, The Goodbye Girl received five Academy Award nominations, with Richard Dreyfuss becoming the youngest person to win Best Actor up to that time (since broken by Adrien Brody for The Pianist).