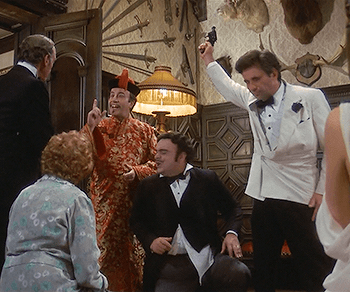 Proceedings:
Colonel Kasteen called the meeting to order. Then she called it to order again. Major Broklaw fired his bolt pistol into the ceiling, and the meeting quickly came to order.
— Ciaphas Cain: Caves of Ice
Advertisement:

An argument has broken out (probably in the local saloon), and it might be about to get violent. Voices rise to an unintelligible clamor, and everyone is losing their head. Suddenly a gunshot rings out and everyone is silenced. The crowd stops and looks at the shooter holding the gun up towards the ceiling, with smoke rising from the barrel of his/her gun, who will then resolve the situation. This is for when a Big "SHUT UP!" just won't cut it. Alternatively, this could be used to frighten and disperse a hostile crowd, especially if they are unarmed or have never heard a gun before.

A show of magical power might be used in the same way in certain genres.

See also Noisy Shut-Up, which this a very common variant. Contrast with Firing in the Air a Lot and Shouting Shooter. Possibly a Sub-Trope of Threatening Mediator.

Do Not Try This at Home unless there is imminent danger of death or serious injury for myriad reasons:

Jennifer actually finds her friends as annoying as Mariner does, and was hoping that she'd tear them a new one. When Mariner starts stunning them all to conserve oxygen, she is giddy.

Example of:
In Love with Your Carnage

Jennifer actually finds her friends as annoying as Mariner does, and was hoping that she'd tear them a new one. When Mariner starts stunning them all to conserve oxygen, she is giddy.