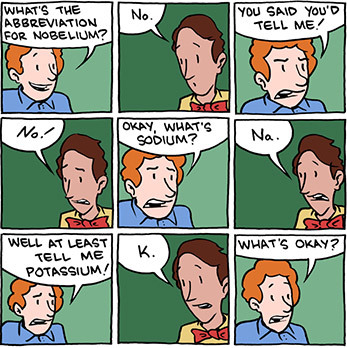 57 panels worth of chemistry puns

Chalmers: Well, Seymour, it seems we've put together a baseball team, and I was wondering, who's on first, eh?
Skinner: Yes! Not the pronoun, but rather a player with the unlikely name of "Who" is on first!
Chalmers: Well, that's just great, Seymour! We've been out here six seconds and you've already managed to blow the routine!
— The Simpsons, "Marge Simpson in: Screaming Yellow Honkers"
Advertisement:

A comedy scene where the proper names of persons, places, or things sound like lexical parts of speech, pronouns or exclamations, such as Hu, Watt, Mee, Yu, etc. Basically, a huge Hurricane of Puns. Usually, one character will describe a situation using these terms solely as names, while another character uses them constantly as pronouns and gets increasingly bewildered. Example:

This is named from a vaudeville routine regarding baseball

which, while popular at the time, is best known through its adaptation as an Abbott and Costello sketch. Abbott and Costello also used variants of the routine in much of their comedy, such as their commercial for "Hertz U-Drive":note a Beam Me Up, Scotty! to set up the joke; the company's real name was Hertz Drive-Ur-Self System

Advertisement:
"If it hurts, you drive!"
"Every company has a head, this company's head's Hertz"
"Well, why don't he take an aspirin?"

"What's that over there?"
"That's a hull of a ship."
or other baseball players:
"The bat was made for Slaughter."

"Ain'tcha got any bats made for baseball?"

This could expand into a Hurricane of Puns: "to make money loafing, you have to really knead the dough."

If used in the actual plot, this is usually the result of an idiot Comically Missing the Point. However, this is not necessary if the Straight Man is being intentionally ambiguous. It needs be emphasized that it is very important for the routine (as the Simpsons quote shows) that no matter how smart either side is or how exasperated it gets (or how eager is one of them to please the other), none of them will ask a question or provide an answer that will be utterly unambiguous.

Occasionally, characters have this as a running joke about their name. Slightly more serious versions may use this as a form of loophole or Prophecy Twist: knowing that No Man of Woman Born may slay you is little comfort when Mr. Noman from the village of Womanborn shows up at your door looking for blood.

See Chain of Corrections, Pronoun Trouble, and Sustained Misunderstanding for related tropes. Sometimes overlaps with What's a Henway?. Often includes a Real Joke Name or two. If it involves an owl and the question "Who?", see Owls Ask "Who?", or for another bird, try Duck!. Frequently, if not usually, overlaps with Overly-Long Gag.

And Harvey Who, the owl, smiles to himself. Just as Planned.

And when you meet him, he reveals that, indeed, his name is "George Someone".

Wiz and Boomstick get into an argument due to confusion over the name of a character, That Man.

Wiz and Boomstick get into an argument due to confusion over the name of a character, That Man.