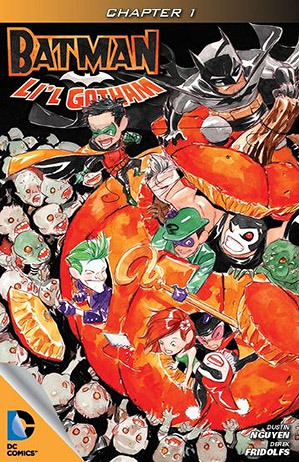 A digital comic series that debuted in October of 2012 and ended in December 2013, published by DC Comics, written and illustrated by Dustin Nguyen and co-written by Derek Fridolfs. Basically a Lighter and Softer version of the DC Universe, centering on the Batman-specific parts of it and involving cuter character designs. As of 2013, there is no overarching plot—the issues are unrelated to each other, and generally center around holiday dates such as Halloween, Christmas, Cinco de Mayo, etc.

The story isn't currently in line with the New 52—or for the record, any other Batman continuity. Nightwing has his iconic blue costume, Barbara is still Oracle, all of the Robins live in Wayne Manor, etc.

The comics can be found on DC's digital comics website at 99 cents an issue here.

They have also been collected in two print volumes.