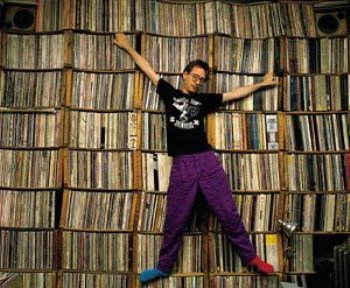 Zorn and a brief summarization of all the genres he mixes in his music.
Advertisement:

John Zorn (born September 2, 1953) is one of the most eclectic composers and musicians alive today. He is a multi-instrumentalist, often classified as a Jazz or Avant-garde Music artist, but his music is far more diverse. The man is the best musical example of Genre Roulette. There are few Western musical forms he hasn't had a go at: Jazz, Avant-garde Music, Classical Music, Rock, Punk Rock, Surf Rock, Electronic Music, Ambient, Klezmer, Improv, Hardcore, Grindcore, Death Metal, Reggae, Blues, movie soundtracks... Not only that, but he mixes all of them together and switches back and forth between them, much like somebody surfing TV channels. He had said on many occasions that composer Mauricio Kagel was his first musical hero, who sparked his interest in experimental music. Another big influence is Carl Stalling, best known as the composer of the original Looney Tunes cartoons.

Zorn is One of Us in the sense that he started composing at an early age and build up a staggering album collection of hundreds of artists, whose influence he drenched into his own work and he frequently pays tribute too. He maintains independence from the mainstream music by working on his own independent label Tzadik. This allows him to both bring out solo records as well as producing and working with many different bands, such as:

People who want to dive into Zorn's work may experience Archive Panic. He has more than 400 recordings attached to his name! And some albums may be too inaccessible for the general public. This makes him a cult figure, rather than a household name.

The Grindcore band "Fuck the Facts" was named after a track on the debut album of Zorn's Naked City band. Another band that ranks Zorn among its influences is Candiria. The tracks "Bonehead" and "Hellraiser" from "Torture Garden" (1990) are used in the opening scene from Funny Games (1998 and 2007).

On September 20, 2006, The Colbert Report mocked Zorn being awarded the Genius Grant. Colbert used a 10-second dissonant excerpt from the 50th Birthday Celebration series and compared it to his blowing into a saxophone, pleading, "Genius Grant please!" Zorn himself took the joke well and felt this Colbert Bump was hilarious.