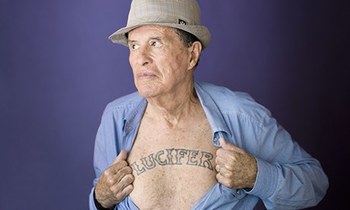 Kenneth Anger (born February 3, 1927) is an American filmmaker, well-known for his ties to Aleister Crowley, the homoerotic subtext of his work, and his dabbling in the occult and black magic. A pioneer of the Music Video as well as the Dream Sequence. Also famous, or infamous depending on who you ask, as the writer of the Based on a Great Big Lie Hollywood gossip book Hollywood Babylon. Anger has since occasionally promised/threatened to release a sequel to Hollywood Babylon, but claims that he is holding off on the project because he is afraid that the book (which he claims contains lurid details about Tom Cruise's private life) will mark him as a target for Scientology.