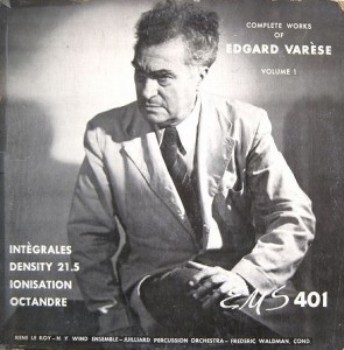 "Dying is the privilege of the weary. The present day composers refuse to die. They have realised the necessity of banding together and fighting for the right of each individual to secure a fair and free presentation of his work".
Edgard Varèse, July 1921.
Advertisement:

Edgard Victor Achille Charles Varèse (December 22, 1883 – November 6, 1965) was a French composer, considered one of the pioneers and frontrunners of Avant-Garde Music. He saw music as a series of organized sounds, even noises, because as he said "what is music but organized noises?".

Varèse is also well known as a pioneer in Electronic Music, using electronic mediums for sound production, though not to actually generate sounds — his work of this type is more correctly considered musique concrète. He was naturalized as an American citizen in 1927. His existing oeuvre is short, consisting of approximately three hours worth of music in total, though almost all of his earlier work was destroyed in a fire. A complete list follows:

Due to Pop-Cultural Osmosis, Varèse is perhaps best known as one of Frank Zappa's major inspirations.