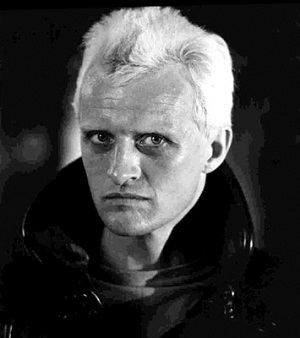 He's seen things you people wouldn't believe.
"Good guy' or 'bad guy', hero or anti hero; doesn't matter to me, what role I play, only the character have something magical."
Advertisement:

His career began in 1969 with the title role in the popular Dutch television series Floris, directed by Paul Verhoeven. His film credits included several famous collaborations with the aforementioned Verhoeven such as Turkish Delight, Soldier of Orange and Flesh+Blood (1985). In Hollywood, he was most famous for Blade Runner, The Hitcher, Batman Begins, and Hobo with a Shotgun. He won a Golden Globe Award for Best Supporting Actor for Escape from Sobibór.

Hauer was a dedicated environmentalist and founded an AIDS awareness organization, the Rutger Hauer Starfish Association. He also made a series of surreal adverts for the Guinness brand of beer in the UK over several years.

He passed away at age 75 on 19 July 2019 note Oddly, his character from Blade Runner, Roy Batty, also died in 2019. He was the father of actress Aysha Hauer and the grandfather of fashion model Leandro Maeder.