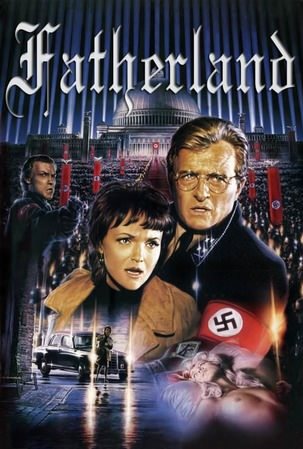 In 1964 — within an alternate timeline where the Nazis won World War II — Hitler invites U.S. president Joseph P. Kennedy (JFK's father) to his 75th birthday celebrations, hoping to reach a détente that will help them finally win the ongoing war against partisans in Russia.

A dead body is found and Xavier March (Rutger Hauer), a good-natured police investigator, takes on what appears to be a simple murder case. Together with American Intrepid Reporter Charlotte Maguire (Miranda Richardson), they start digging deeper and discover that high ranking Nazi officials are being killed to protect the biggest secret of the war, the Final Solution, which has been kept hidden from the public for twenty years. March and Maguire's activities soon come to the attention of the Gestapo, meaning they must get the last evidence of the Final Solution to President Kennedy before it is lost forever.

This film contains examples of the following Tropes:

In this alternate history Germany, the protagonist is told about the Holocaust by way of euphemism.

In this alternate history Germany, the protagonist is told about the Holocaust by way of euphemism.