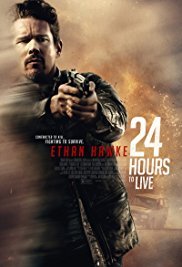 Travis Conrad is a hitman sent after a man meant to testify before the United Nations. He is shot by an Interpol Special Agent in the process of getting his man. However, just after he dies, he suddenly wakes up again. You see, his employers have resurrected him to reveal his target's location before he's disposed of for good. Thing is, Travis retains his combat skills, breaks free and seeks revenge.

Not to be confused with the Hey Arnold! episode "24 Hrs. to Live."