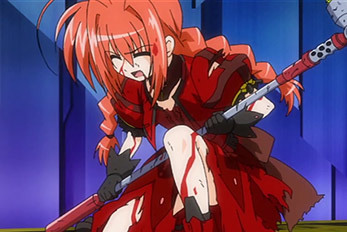 Characters who have a tendency to receive horrible injuries also tend to wear red. Perhaps this is some bizarre permutation of the Red Shirt effect, warped slightly by Contractual Immortality. Perhaps some otherworldly fashion deity has declared that anyone likely to be spattered with blood must wear complementing shades of scarlet. Or perhaps it is the censors wanting to keep the carnage from standing out more. Whatever the reason, it sometimes seems as though all a guy has to do to get his arm hacked off is stand near some red drapes. And woe be to one of those guys if he ever comes near a bullfighting stadium...

The trope name comes from an old joke: the captain of a ship always asks for his red jacket before a battle, so his crew won't see him bleed and therefore lose morale. Just before a battle, he asks for his red jacket to be brought to him and, when his friend asks why, explains that. Thinking about that, and about his own fear of the combat about to ensue, the friend calls out for the crew to Bring My Brown Pants.

Red is also a dangerous color for young girls to wear — older girls, however, are more likely dangerous themselves. Sometimes young girls are, too.