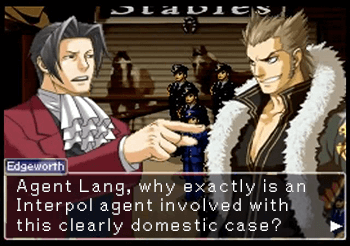 As it turns out, he actually has a reason.
Advertisement:

In reality, the International Criminal Police Organization — the ICPO or Interpol — acts as liaison among the national police forces of member countries, maintains a database on international criminals, and writes (along with the FBI) those "pirating this movie is illegal" messages/PSAs that get removed in the pirated versions of films anyway. In other words, they don't do any direct investigation or prosecution themselves; they simply facilitate communication between agencies in different countries.

In fiction, Interpol acts more like U.N.C.L.E. and sends agents (normally solo), who somehow have full power over local police, out to track down and capture international criminals. One reason for this trope is that everyone knows Interpol is "international police" and it avoids the need to create a group wholesale, even if that means fudging what they actually do.

Compare United Nations Is a Superpower for details on the One World Government that presumably gives the World Police their orders. Not to be confused with the band.

A form of Artistic License – Law.