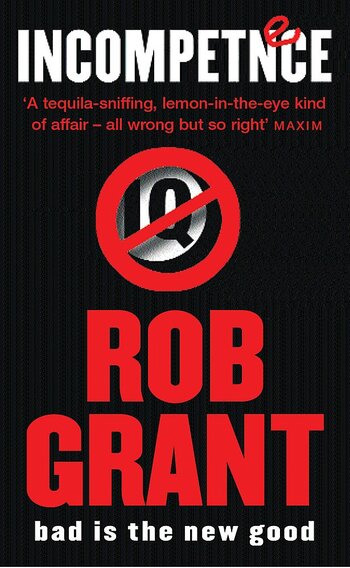 Bad is the new good.

Incompetence is a Black Comedy novel by Rob Grant (of Red Dwarf fame).

Set 20 Minutes into the Future, it takes place in The United States Of Europe, where Political Overcorrectness has reached Dystopian Edict levels, and laws have been passed that forbid the discrimination of people based on race, class, gender, creed or competence. Thus, a society has been born where everyone is bad at their job because employers aren't allowed to use someone's actual ability to do the job as a reason to hire/fire someone. Most shoes are made of vegetable matter, a hotel room will only have furniture in it if you're lucky (and be completely non-existent if you're not), and signposts rarely agree with each other, let alone point the correct way. As an added joke, one can track how many originally absurd rules from this book were actually realised by European Union between publishing and present.

The main character is a detective working for an un-named secret organisation who uses a variety of pseudonyms, most commonly "Harry Salt". Unlike most people, Salt is actually intelligent and competent at his job, but has grown to loathe it due to being the Only Sane Man. His fellow agent and mentor "Klingferm" has been murdered, and Salt must track down his killer. Unfortunately, the world he lives in only seeks to hamper his efforts rather than help him in any way.