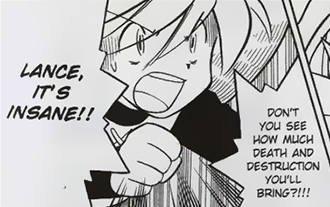 What's wrong with bringing death and destruction?
Sherlock: You're insane!
Moriarty: You're just getting that now?
— Sherlock
Advertisement:

A stock phrase typically spoken at the climax of a story.

The hero confronts the Big Bad, especially one they used to trust before their true colours were revealed about their actions. During the confrontation, the villain eagerly justifies the Evil Plan they've carried out with repugnantly twisted logic that is devoid of any trace of humanity or ethics and is often about to commit his supreme atrocity with a wild grin. The hero reacts with outrage at this depraved justification with "You're insane!" and instantly attacks to stop him.

Sometimes "mad", "crazy", "out of your mind", or "sick in the head" may be substituted for "insane", but the nature of the trope is the same.

Another heroic staple is this being one hero's response to another's proposal of a Zany Scheme — in which case the counterpoint is obviously, "Crazy Enough to Work!"

A villainous lunatic may well agree with you, perhaps with a snarky response like "You've only just now noticed?". A Mad Scientist will often retort that "They Called Me Mad!" Sometimes you can even say this to the villain when he's suffering a Villainous Breakdown. Some characters might throw back "I prefer the term..." followed by an adjective that they think best describes them. As a matter of fact, some Smug Snakes or even Magnificent Bastards can go so crazy during their breakdowns that other characters love hitting them with this. Sometimes the character will have indicated that he's considered the accusation against himself already, and deciding it really doesn't matter, often with an "Am I?" statement.

If a villain's henchman is giving the "You're Insane!" speech, it's often because what the villain is planning was not what he or she signed on for.

Contrast After-Action Villain Analysis for when the hero psychoanalyzes a villain after the fact.

Charlie: Wait, that's the favor? You called me out here just to open a door?
Joker: Well, look at the size of that cake, man! She can't open the door and push it in all at once! Think!
Charlie: (Aside) He's nuts...

TV Tropes, you're insane with your tons of articles! You're wasting my time!
Feedback

Alternative Title(s): This Is Madness