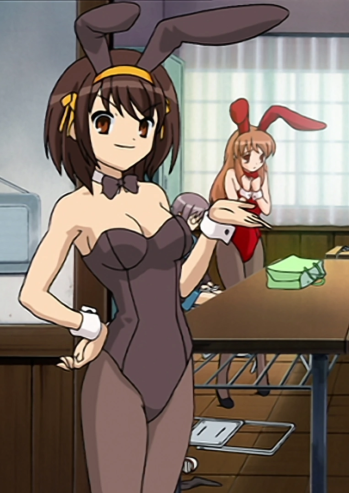 Poke the Bunny.
"Who's [your tailor]? Hugh Hefner? All you need is a cotton tail on your butt and some rabbit ears."
— Mindmistress (to Dasien), The Crossoverlord
Advertisement:

The Playboy Bunny... a sexy costume popularized by the Playboy Club, composed of a corset (color varying, though often black or pink, and typically with plenty of cleavage), fake bunny ears, a collar with a bowtie, cuffs, a fluffy tail (usually made of cotton), some hose or stockings (usually fishnets), and high heels. The choice of animal comes from rabbits' reputations for being Explosive Breeders, thus implicitly equating the costume with promiscuity.

For whatever reason, any female character could end up in this costume. Most often the pretext is quite flimsy, as it is hard to pretend that this is anything but Fanservice. Mainly seen in Anime and Manga; not absent from Western works but rarer, precisely because Playboy had a trademark for a long time on this particular outfit, and American intellectual property laws are a little stricter than in Japan. Oddly enough, the "anyone could end up in one" part applies even more in regards to official merchandise, with many characters who never wear it in-show still getting an official Playboy Bunny-clad artwork or figurine (or multiple).

This is one of the most common forms of fetish wear, along with its Sister Tropes, the French Maid Outfit and the Naughty Nurse Outfit. If done willingly by the woman, she's certainly trying to seduce some love interest. More often, for comedic value, she's not exactly happy about the dolling up, but can't escape it. Might have involved an Instant Cosplay Surprise.