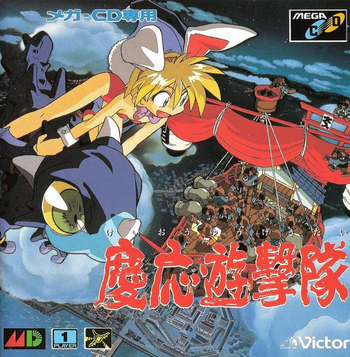 Keio Flying Squadron (known as Keio Yugekitai in Japanese) is a series of three games developed by Victor Entertainment in the 1990s. The first game, released in 1993 for the Sega CD, is a standard Horizontal Scrolling Shooter. The second game, a 1996 release for the Sega Saturn, is a 2D Platform Game, and the third game is a 1998 Party Game for the PlayStation.
Advertisement:

The series follows the adventures of a 14-year-old girl named Rami Nana-Hikari, who dresses in a Playboy Bunny outfit and lives with her grandparents and has a pet dragon named Spot (Pochi in the Japanese versions). Her enemies include Dr. Pon Eho, a tanuki Mad Scientist with an IQ of 1400 that stole Rami's sphere from her, and Himiko Yamatai, who first appeared in the second game, a princess who claims the spheres belong to her family. She also pilots a robot named Psy-vee.