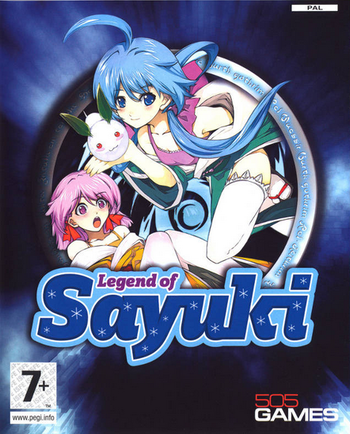 Yukinko Daisenpuu ~Sayuki to Koyuki no Hie-Hie Daisoudou~ (雪ん娘大旋風～さゆきとこゆきのひえひえ大騒動～), released in America as Heavenly Guardian and in Europe as Legend of Sayuki is a Cute 'em Up developed by Starfish SD.
Advertisement:

The story revolves around a Snow Goddess named Sayuki, who is in love with a young boy from a village that fears the Snow Goddesses. Visiting the village one day, she learns that the boy has been cursed with an eternal sleep. Reading up on the curse, she discovers a remedy that cure her love's condition but it requires seven ingredients that she must travel the land to acquire. Armed with her powers over ice and snow and accompanied by her pet snow rabbit, Toto, Sayuki must battle a variety of ghosts and monsters to gather the ingredients and save her beloved.

The game was released for the Nintendo Wii in 2007 and the PlayStation 2 in 2008, initially intended as an entry in the Kiki Kai Kai series before Taito was bought by Square Enix. The gameplay is therefore similar to those games; the player controls Sayuki from a Three-Quarters View perspective, battling various monsters as you gather Power Ups and fight your way through the levels, battling bosses for the cure ingredients Sayuki needs. Sayuki fights by firing iciles in the direction she is facing (or where the cursor is pointing in the Wii version), with Toto offering support by firing freezing blasts. The player can collect multi-coloured crystals that not only power up Sayuki's attack but gives them different properties (Rapid, 3-Way, Homing, Bomb), as well as snowballs that can be used to power a blizzard attack that hits many enemies and freezes them instantly, or "Toto's Wild Dance" attack that involves Toto acting as a shield that freezes enemies on contact. At the end of each level is a boss who must be defeated in order to claim one of the ingredients. Along the way, Sayuki can use her blizzard attack in certain spots to discover the Yukinkos, bashful creatures that are hidden in the scenery, in order to unlock additional modes.

The game also has a two-player mode where the second player takes control of Sayuki's sister, Koyuki. This version has a different story, involving the two sisters competing to see who can collect the most snowballs and get through the levels the fastest.

In 2019, the game was ported to Nintendo Switch and Steam under the name Snow Battle Princess Sayuki.

This game contains examples of the following tropes.