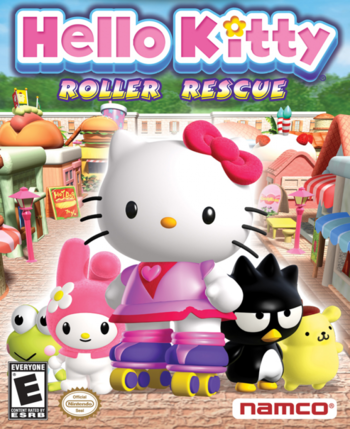 Following his last, disastrous attempt at conquering a planet, the evil Emperor Block-O stumbles upon Earth and decides that this time, he will succeed. To that end, he quickly launches a massive, block-shaped army to invade Earth and kidnap Kitty's friends and family. Block-O's ultimate goal is to turn everyone on the planet into a cube-shaped being like himself.

Hello Kitty is not pleased. Armed with a magic wand and roller skates, she must rescue those who were captured and turn back the alien invasion. Once she rescues enough friends, they can help too, with each partner offering different combat abilities.

The game has a fair amount of unlockables, with character profiles, mission rankings, upgrading partners, a Sound Test, and rescuing everyone who was captured.