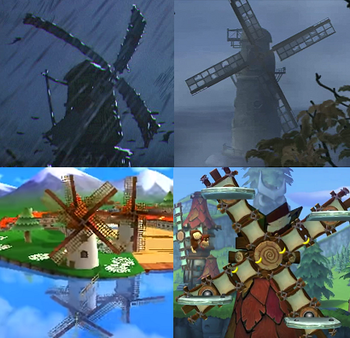 Round and round they go.note  Clockwise from the top-left: The Old Mill, Mystery Case Files: The Malgrave Incident, Donkey Kong Country: Tropical Freeze and Mario Kart 7
Advertisement:

Once used to mill grain or pump water, windmills have long since been superseded thanks to the advent of more recent technologies, although there has been a movement in recent years to preserve, rebuild and use mills once again. They are nowadays similar to the lighthouses, serving no purpose other than being a distinctive landscape feature, often to add a rural, quaint flair, although they have occasionally been used to crank up the creepy factor.

Works taking place in ancient times still feature them doing what they were intended for in the first place: grinding grains.

They typically have 4 sails, but may have as many as 6 or as few as 3.

Sister trope to Lighthouse Point, since windmills and lighthouses are usually used in the same way. See also Land of Tulips and Windmills for the Hollywood Atlas version of The Netherlands, which make an abundant use of this trope. Unrelated to Windmill Political, No Mere Windmill and Windmill Crusader (except for the Trope Namer). In video games, it's likely to appear in Gusty Glade levels.