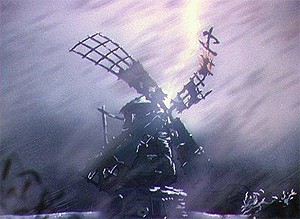 The Old Mill is a 1937 Silly Symphonies short and is considered one of the most important shorts in the Classic Disney Shorts lineup. While the short has no plot or concrete characters, what carries it is its astounding animation quality – being made not long before the release of Snow White and the Seven Dwarfs, it was meant to not only prepare the animators to the grueling task of completing the aforementioned film, but also to test Disney's then new Multiplane Camera and techniques for effects shots. The results are nothing short of jaw-dropping – naturalistic, fluid animation; rich, lush, three-strip Technicolor; and some very, very impressive staging, mood, and use of scenery. Also a source of Nightmare Fuel near the end.

Tropes present in this cartoon: