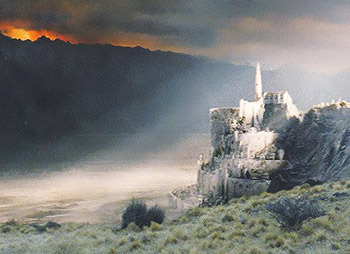 "Behold!" Oscagne intoned quite formally. "Behold the seat of beauty and truth! Behold the home of wisdom and power! Behold fire-domed Matherion, the centre of the world!"
— Domes of Fire
Advertisement:

No matter what age it's built in (bronze, middle, modern or crystal) the Shining City is awesome, perhaps the best city to live in anywhere on the world. The Shining City is usually purpose built from the word "Go", not a disorderly Mega City that grew out of a settlement over hundreds of years. From the air, neat geometric patterns will be visible (not just grids, but circles, triangles, or fantastic symbols that create powerful Geometric Magic — see Mystical City Planning), and on the ground each and every building integrates seamlessly into a greater overall style. Above all, the Shining City is bright. On approach, expect it to be shown with lots and lots of artful shafts of sunlight that gleam off the simple yet elegant white buildings; at night it will shine like a neon angel. It will have lots of soaring towers, and citizens of the Shining City never suffer from acrophobia.

The Shining City is usually the capital to The Federation, has the headquarters of Heroes Unlimited, or is home to the heroes' favorite Reasonable Authority Figure. Because of its size it likely won't have the kooky and cozy feel of a small town, or the gentle pace of the countryside, but the inhabitants will at least be polite if not friendly, full of energy, and usually pursuing activities "of high culture and art". If that sounds a bit snobby, then you've guessed right, the inhabitants (and often times the rulers) of the Shining City are culturally arrogant and perhaps unhealthily insular.

Thematically, it will serve as an urban beacon of hope for what mankind can build when it works together. And for these reasons it tends to make viewers feel at home there and players feel protective. However, for those who have a more cynical view of humanity, it can degenerate into a Soiled City on a Hill.

Not surprisingly, the bad guys want to destroy or conquer it. Reasons can be simple ambition or Slobs Versus Snobs brand jealousy, this one is common when the bad guys operate out of the Shining City's antithesis, the City Noir. Depending on the story, it may survive intact, get random but repairable property damage, or be doomed to burn like Troy. For extra fun, the bad guys' forces will be represented as an evil dark cloud on the horizon, threatening to both literally and figuratively darken the Shining City. Boiled down to basics, it's the urban equivalent of having a villain say "I Have You Now, My Pretty!" to a city.

Its Shadowland is prone to be a dark forest or other, even more inhospitable wilderness, but can also be the countryside as a place of ignorance, insularity, and sloth. Frequently the rest of the world is Crapsack Only by Comparison.

When a city is "shining" in a literal sense but not necessarily a metaphorical one, see Neon City. If the Shining City used to be a Wretched Hive, than it is a Heel–Face Town.

The Enterprise arrives at starbase Yorktown, for resupply, shore leave for its crew and a good dose of eye candy for the audience.

The Enterprise arrives at starbase Yorktown, for resupply, shore leave for its crew and a good dose of eye candy for the audience.