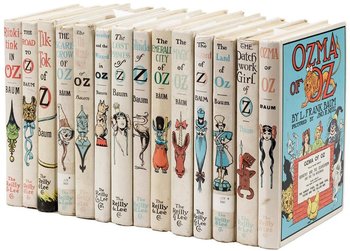 Baum's Oz books, which are only 14 of 40 books.
"The Land of Oz has never been civilized, for we are cut off from all the rest of the world. Therefore we still have witches and wizards amongst us."
—The Good Witch of the North, The Wonderful Wizard of Oz
Advertisement:

The Land of Oz is a fantasy setting created by L. Frank Baum in his novel The Wonderful Wizard of Oz.

The book has had 39 official sequels published by Reilly & Lee, with the originals generally being called "The Famous Forty", 13 of the sequels being written by Baum, and 35 books illustrated by John R. Neill. L. Frank Baum wrote the second book only to capitalize on the success of the stage version of The Wonderful Wizard of Oz. Reilly & Lee convinced him to write an additional four books, and Baum attempted to end the series after book six, only to be forced to return to the series three years later after some poor theater investments and poor sales on his other fantasy series starring the characters Trot and Cap'n Bill (who were later imported into the Oz books). He wrote a total of 14 books before his death in 1919. With L. Frank Baum's widow Maud Baum's blessing, the series was continued by five different authors (with Ruth Plumly Thompson, the first to continue the series, eventually publishing more Oz books than even Baum). The books came out basically yearly until the output began to slow down in The '40s, after Thompson left the series and Neill's untimely passing. The last book was published in 1963, 63 years after the first book, with many unauthorised sequels and spinoffs coming afterward once the books began passing into the public domain, including a few by former authors of the Famous Forty, which some fans may consider at least as good as canon, but still unofficial. Here's a list of titles:

The first 21 books are now public domain in the United States. With the expiration of the 1998 Copyright Term Extension Act, The Cowardly Lion of Oz entered the US public domain in 2019, and the next book, Grampa in Oz, entered public domain in 2020. This will continue yearly unless another copyright extension law is passed. Thompson's final five books entered the public domain decades ago when the publisher failed to renew their copyright; this is also true of both of Jack Snow's books. Books that are still under copyright can be significantly harder to track down, with many of them being out of print.

However, these books are not necessarily PD in other countries. Since Baum died in 1919, all of his books are PD worldwide; this is not the case for works by other authors. For example, none of Thompson's books are PD in the EU or UK. Both entities base their copyright terms on the lifespan of the creator—to be exact, works enter the PD on the January 1 that follows the 70th anniversary of the creator's death. Because Thompson lived until 1976, her books won't be in the EU or UK PD until 2047.

For more about the many spin-offs and adaptations, including numerous books not included in the "Famous Forty", see Land of Oz.

The Land of Oz was the Older Than Television, Unbuilt Trope Trope Maker / Ur-Example / Trope Codifier for:

Books in the Famous Forty with their own trope pages include:

The remaining books in the Famous Forty include examples of: