Literature / The Tin Woodman Of Oz 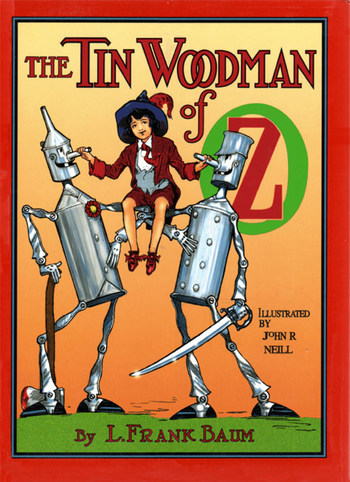 The Tin Woodman of Oz is the twelfth book in L. Frank Baum's Land of Oz series, released in 1918. It's subtitle is A Faithful Story of the Astonishing Adventure Undertaken by the Tin Woodman, assisted by Woot the Wanderer, the Scarecrow of Oz, and Polychrome, the Rainbow's Daughter. In this book, Baum at long last ties up some loose ends in the Tin Woodman's backstory going back to The Wonderful Wizard of Oz. Baum dedicated the book to his grandson, Frank Alden Baum.

A young boy from the northern Gillikin Country of Oz, Woot the Wanderer, arrives at the tin castle of the Emperor of the Winkies, the Tin Woodman. Woot is welcomed by the Tin Woodman and his guest the Scarecrow. In the course of conversation, Woot asks how the Tin Man became tin. The Emperor retells his story. Originally a normal man of flesh and blood named Nick Chopper, he had fallen in love with a Munchkin girl named Nimmie Amee. She was the oppressed servant of the Wicked Witch of the East. Nick wanted to marry Nimmie, but the Witch found out about them; she enchanted Nick's axe so that it "accidentally" cut off his leg. Nick had his missing leg replaced with a tin substitute. Nick persisted in his suit, as did the Witch in her malice. The loss of his leg was repeated with his other leg, and his arms, and so on, until he was entirely made of tin. Nimmie Amee still wanted to marry Nick; but he had no heart, and could not return her love. He went in search of a heart — but rusted in the rain, and remained motionless until Dorothy and the Scarecrow discovered him. In time the Wizard of Oz gave him a heart; it was a kind heart, but not a loving one. Woot points out that it was cruel for the Tin Woodman not to return to Nimmie and ask her to marry him; seeing the error of his ways, the three decide to find the lost Nimmie Amee. The trio set out the next day, undergoing many trials and tribulations along the way.