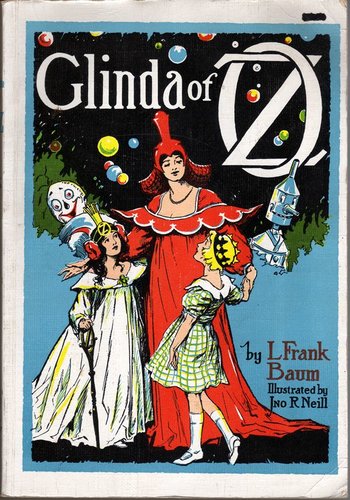 Glinda of Oz is the fourteenth book in the Land of Oz series. Published in 1920, it was the last Oz book written by L. Frank Baum before his death.

Princesses Dorothy and Ozma learn of a looming war in a remote region of Oz near the edge of Gillikin Country between two rival tribes, the Skeezers and the Flatheads. Being the ruler of Oz, Ozma decides to visit the two tribes and mitigate the quarrel. They first travel to meet the Flatheads, who live on top of a mountain and are ruled by a Supreme Dictator (Su-Dic). Being unable to talk him out of going to war, Dorothy and Ozma escape his clutches and travel to glass-domed island city of the Skeezers, where they meet that tribe's ruler Queen Coo-ee-oh, a vain narcissist who is determined to fight the war as well. Dorothy and Ozma are imprisoned by the Queen, and then trapped when she sinks the island and then is turned to a swan by the Flatheads, leaving it up to sorceress Glinda the Good and Dorothy's other friends to rescue them.

Being Baum's last Oz book, Glinda of Oz is a bit different from its predecessors. It depicts a slightly more technologically advanced Oz and has some darker themes than in previous books.

Glinda of Oz provides examples of: