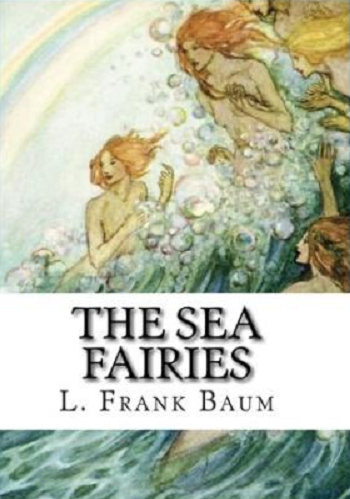 The Sea Fairies is a 1911 fantasy novel by L. Frank Baum. It was designed as the first volume in a new series for children, to replace the Oz books. It was followed by Sky Island in 1912.
Advertisement:

Mayre Griffiths, nicknamed Trot, is a small girl living on the coast of California, her close friend and companion is Cap'n Bill, formerly her father's employer and now a retired seaman with a wooden leg. As they walk along the beach one day, Trot wishes that she could see a mermaid, but Cap'n Bill cautions her that no man has ever lived to tell the tale after seeing a mermaid. Trot questions this, since if no one lived to tell the tale Cap'n Bill logically would never have heard it, but he doesn't have a good answer for her. Nearby mermaids overhear them, and the next day when the two of them are boating and row into a sea cave, grant Trot her wish. The mermaids explain that they are "sea fairies," and offer the girl a chance to experience their world. Trot is eager to go; Bill is not, but is too loyal to let Trot go by herself. Magically transformed into mermaid and merman, the two embark on an underwater adventure.

The two see amazing sights in the domain of King Anko and Queen Aquareine including an octopus who is mortified to learn that he is the symbol of the Standard Oil Company. They also encounter a villain called Zog the Magician, a monstrous hybrid of man, animal, and fish. Zog and his sea devils capture Trot and Cap'n Bill and hold them prisoner. The two protagonists discover that many sailors who are thought to have drowned have actually been transformed into zombie-like gilled slaves by Zog. Although protected by magic, Zog wishes to find a way to kill Cap'n Bill and Trot, only to spite his enemy who they have recently befriended, King Anko the sea serpent.