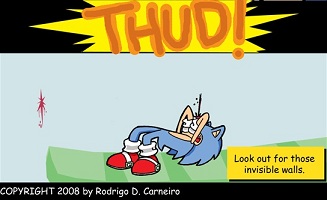 The only thing to slow down Sonic. note Original work

The most extreme and egregious form of the Insurmountable Waist-Height Fence. The Invisible Wall is Exactly What It Says on the Tin: a boundary that limits where the player can go, even though there's nothing physically there to stop them. It's as if someone decided to build a glass wall. You try to walk past it, but your character just stops or walks in place. You can't see the boundary, but it's there. There's not even a flimsy Hand Wave as to why you can't keep going. You just can't.

In 2D games, the edge of the screen itself frequently served as the Invisible Wall, working on the principle of "out of sight, out of mind"; you can't go there, but as far as you can see there's nothing there anyway, so why would you want to? Then again, once the edge of the screen starts crushing you, questions may arise.

Depending on the capabilities of the Player Character and the geography of the game setting, some Invisible Walls may at times be Acceptable Breaks from Reality. Since the game world is necessarily limited in size, a level designer ultimately has to decide if simply forbidding a player from going out-of-bounds with a seemingly arbitrary block breaks Willing Suspension of Disbelief more than having the player walled-in on all sides. One way of averting this dilemma is to use a natural Gravity Barrier, which is why islands in the middle of the ocean, floating islands or fortresses, and high plateau mesas with seemingly-bottomless cliffs are such popular game settings. Border Patrol can also be used in place of invisible walls (or at least to keep the player from ever reaching the invisible walls that do exist), though this isn't always practical.

Usually, the only indication that an invisible wall exists is when the player character suddenly bumps against solid air, but very occasionally designers will give it some architectural tells or special effect indicators (at least when the player hits it), turning it into Some Kind of Force Field with in-universe justification (though one that's usually not elaborated upon).

Generally acceptable when used to demarcate the edge of a level, but invisible walls are a renowned Scrappy Mechanic when used within levels, especially when mixed in with the regular level geometry, where they can seemingly arbitrarily block players off from routes or places that look viable. In the worst case scenarios, invisible walls can actually be bumped up against during regular gameplay, messing with the player's controls in the process. In all situations, the work of the designer is either to find "natural" ways to limit the player's movement, or at the very least to make it obvious what is and isn't meant for gameplay before the player tests it with their noggin.

When the invisible wall prevents you from walking past the edge of a platform, be it next to a Bottomless Pit or not, it's a case of Edge Gravity.

Not to be confused with the former GameTrailers podcast/web show, Invisible Walls.