"Could Have Avoided This!" Plot 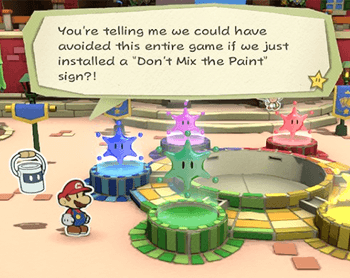 Huey makes a valid point right after collecting all of the Big Paint Stars.
"Why didn't you just say that in the first place?! We could have skipped all the melodrama and sharp things!"
— Sonic the Hedgehog, Ghosts of the Future, Issue 6: "Old Flames, Act III"
Advertisement:

You have your standard plot, with all the drama and conflict and what have you. But when everything is resolved and wrapped up, the characters realize that much of the plot, if not every bit of it, could have been avoided if they had done something different. That's right — it's an In-Universe realization on behalf of the characters, not the audience.

It often happens due to Poor Communication Kills (talking things out would've helped majorly), but it's not restricted to that. Whatever it is, it must be something that would've rendered the plot unnecessary at a reasonably early point in the episode/work, thus it is oftentimes dismissed as being "the easy way out".

It may serve as An Aesop if doing the moral/ethical thing from the start would've improved everything. If the drama happened because a character or more behaved in an uncharacteristically dumb or aggressive way, then the Idiot Ball or the Conflict Ball was used, respectively. If everybody involved was being stupid, you may have an Idiot Plot or Plot-Induced Stupidity.

Frequently lamp-shaded by a You Didn't Ask exchange.

Compare Didn't Think This Through, where a plan proves to have crippling flaws after its execution, and Stating the Simple Solution, when a character points out that a plan is impractical and offers a much easier one before carrying it out. Can overlap with "Shaggy Dog" Story. Please remember this trope allows In-Universe Examples Only, and do not confuse with events unfolding according to the Theory of Narrative Causality.

Could Have Called MIT

After the initial memory spell fails, Doctor Strange asks Peter why he didn't just call the admissions department at MIT and ask them to reconsider MJ and Ned's applications before coming to ask for magical assistance.

Could Have Called MIT

After the initial memory spell fails, Doctor Strange asks Peter why he didn't just call the admissions department at MIT and ask them to reconsider MJ and Ned's applications before coming to ask for magical assistance.