Webcomic / Ghosts of the Future 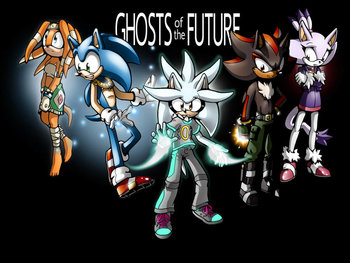 This artwork was created around the comic's first year.
Ghosts of the Future

is a Sonic the Hedgehog fan comic written and illustrated by Evan Stanley (a writer and artist on the official Sonic comics, both Archie and IDW versions), co-written since issue 10 by Tom Campbell (aka Okida, the creator of Sonic the Continuation), and colored since issue 18 by Reggie Graham (another IDW Sonic artist). It started on September 24, 2007 and continues to this day.
Advertisement:

It's 200 years after the deaths of Sonic and his best friends and the removal of the Chaos Emeralds from the main universe. Silver the Hedgehog is just an ordinary kid living in San Francisco and working at a small Chinese restaurant in the Friendly Local Chinatown, until he starts having strange dreams. Then he meets the immortal Shadow, who is being guided by the ghost of Sonic, and learns that he must now retrieve the Chaos Emeralds from The Multiverse to prevent the destruction of the main universe. Along the way, he will have to help Sonic's ghost confront his horrible memories, help Shadow overcome his guilt, and help himself deal with his feelings for his best friend and coworker, Blaze. They also encounter a centuries-long sinister project by a powerful force...

The comics can all be found Evan Stanley's DeviantArt gallery

and the Middle Ground

, a Sonic fancomic site. If you'd like the comics to be read along to, you can check out the official motion comic version of the first two issues

Now has a character and recap page.

Not to be confused with the The Incredible Hulk arc of the same name, Ghosts of the Past, or the Ghost of the Christmas Yet to Come. See also The Murder of Me, another popular Sonic the Hedgehog fancomic which is also a Dark Fic with a supernatural flavor and starring the three hedgehogs as the protagonists. It is also created by a red-haired Promoted Fangirl, albeit named Gigi Dutreix, and Stanley is in fact best friends with her.

Tropes of the Future:

Please note that links to lore (aka Word of God) may have spoilers. You Have Been Warned!