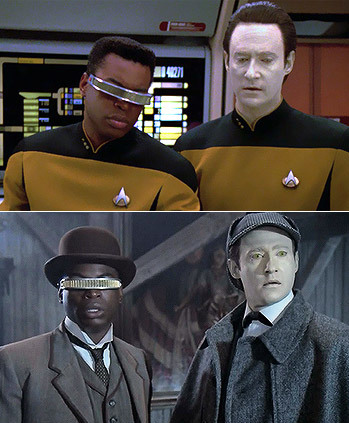 An alternative reality episode that's an excuse to put the characters in period costume. The term is almost exclusively the property of episodic TV and film. The Wild West, The Roaring '20s or the Genteel Interbellum Setting, and film noir environments are popular destinations. In SitcomLand, it is usually either a Dream Sequence (sometimes in the form of a Whole Plot Reference) after a character falls asleep in front of the TV, or a flashback told by an older relative about the characters' identical ancestors. It's also a popular type of Alternate Universe Fic.

Note: In theater, the term exclusively means "a person who makes costumes." You wouldn't call a play a costumer (unless it was about Edith Head