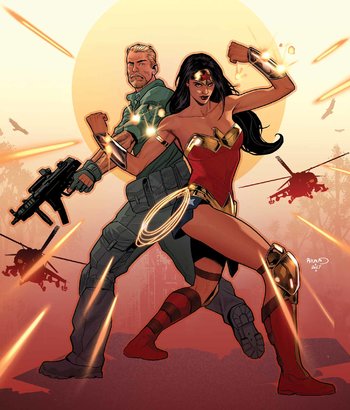 Behind every great Wonder Woman...
Advertisement:

A military man and intelligence operative, Steve Trevor is classically associated with his longtime ally (and frequent love interest) Wonder Woman. In most iterations, he's the first man Diana has ever seen, and is considered a rare male ally to the island of Themyscira.

Throughout the years, Steve's involvement in the Wonder Woman mythos has varied. Though originally introduced as a World War II-era figure, his origin has taken him as far back as World War I, or into the present-day.

Because of his prominence as a supporting character in The DCU, Steve has appeared often in other media. In live-action, he's been portrayed by Kaz Garas in the 1974 TV films, by Lyle Waggoner in the 1970s series and by Chris Pine in the DC Extended Universe.

Steve Trevor has appeared in: