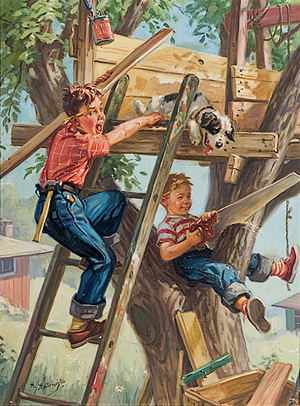 "Grantville, West Virginia was the mold that produced Jeff Higgins. All things said and done, it was as good a mold as any and a better one than most."
— 1632
Advertisement:

This species has seldom been seen in recent decades, and naturalists have put it on the endangered species list. The All-American boy is male, almost always white, often blond-haired, sometimes brunet, but always blue-eyed; add buckteeth and Youthful Freckles for extra appeal. He loves baseball, apple pie, his mother, his pet dog, and Jesus; he has aptitude with rural machinery and firearms far beyond his years. He's known to emit sounds like "Jeepers!" and "Gee Whiz!".

The All-American boy makes his home in Everytown, America, in the heart of Eagleland, within which he is as free as the air, pedaling everywhere on his bicycle or spending hours having innocent fun in his treehouse. He is naive but charming and always polite (the worst he dishes out is "You shut up!"), and he treats his parents (who most likely are a Standard '50s Father and a House Wife) and other elders with respect. He is probably a Boy Scout (or a Cub Scout if still in elementary school). If he has a sibling, it will be an older brother to idolize or a little sister to protect — perhaps both. It is likely that he and his family will be Minnesota Nice.

There are variants of this trope. The geeky variant is similarly characterized by ingenuity, self-reliance, and wholesomeness, but he applies his interest to at-home science experiments and the like, and wears Nerd Glasses. The high-school variety wears a letterman's sweater, plays football or baseball, and spends his off hours using his mechanical skills to restore an old car. You might have a "wilder" boy with a mischievous streak in him, but he'll grow out of it eventually and become the fine, upstanding man his parents raised him to be.

An All-American boy often gets a job as a Kid Detective. If he joins the military when he grows up he will almost inevitably become a Southern-Fried Private. He may want to see more of the world and venture into The City, but expect him to return to his hometown, disillusioned with the citygoers' air of cynicism and greed. Your All-American Boy will almost certainly marry his high school sweetheart, and then settle down to raise a family, with at least one son just like him.

The closest Distaff Counterpart would probably be Girl Next Door. Likely grows up to be the All-American Face.