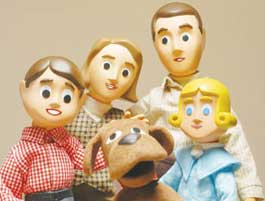 Art Clokey, the creator of Gumby, produced this syndicated Religious Edutainment series in the early 1960s for one of the predecessors of the Evangelical Lutheran Church in America. It centered on a young boy named Davey Hansen and his talking dog, Goliath. When Goliath speaks, only Davey can hear him. More information can be read here.

The Simpsons episodes "Bart the Lover", "Simpsons Bible Stories", "HOMR" and "Ned 'n' Edna's Blend" all include mocking references to Davey and Goliath. Adult Swim's Moral Orel started as a direct spoof (at least, that's what popular belief will tell you)note the show's creator only says it was inspired by Leave It to Beaver, but the homage in the character design seems obvious.