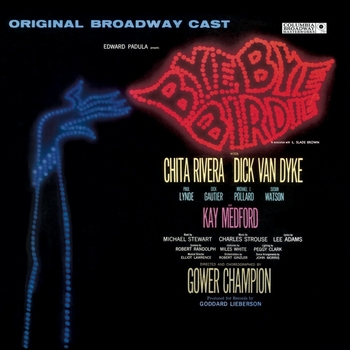 Bye Bye Birdie is a 1960 musical comedy with book by Michael Stewart, music by Charles Strouse and lyrics by Lee Adams, inspired by the hoopla that surrounded Elvis Presley's induction into the U.S. Army.

The story concerns Albert Peterson, a neurotic wannabe academic who is working as an agent for rock-and-roll sensation (and troublemaker) Conrad Birdie in order to pay off his debts and return to college, and the scheme he cooks up along with his secretary, Rosie Alvarez, to make a killing when Conrad is drafted into the Army. Since this means he'll likely be "out of action" for at least two years, which—as we all know—might as well be forever in the entertainment business, Albert needs to cash in big and cash in now.

Albert's plan is really quite simple: all he has to do is write a hit song called "One Last Kiss" for Conrad to record, and announce that Conrad is going to perform that song for just one of his millions of hysterical fangirls, giving her that "one last kiss" in the process. Then all he has to do is keep Conrad out of trouble long enough to get him into the Army and out of his hair and the money is bound to start rolling in. What could possibly go wrong? The lucky girl turns out to be Kim MacAfee, the president of the Conrad Birdie Fan Club in Sweet Apple, Ohio, who just happens to be going out with a nerdy boy named Hugo. Hilarity Ensues.

Bye Bye Birdie was most successfully adapted as a 1963 film directed by George Sidney, starring Dick Van Dyke as Albert (reprising his original Broadway role), Janet Leigh as Rosie, and Ann-Margret as Kim. A TV movie version was made in 1995 with Jason Alexander as Albert, Vanessa Williams as Rosie, and Chynna Phillips as Kim.