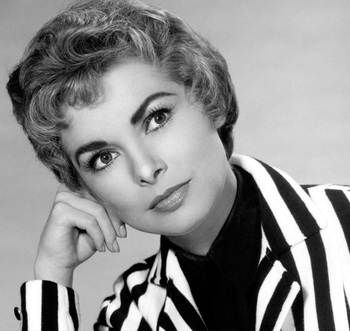 "The dream factory of that time was much simpler. As media outlets grew, everything became so complicated."
Advertisement:

Discovered by Norma Shearer, Leigh made her acting debut on radio in 1946 and secured a contract with Metro-Goldwyn-Mayer the following year. Early in her career, she appeared in popular films spanning a wide variety of genres, though she played mostly dramatic roles during the latter half of the 1950s, in such films as Safari (1956) and Touch of Evil (1958), before achieving her most lasting recognition as the doomed Marion Crane in Alfred Hitchcock's Psycho (1960). For her performance, she was awarded the Golden Globe Award for Best Supporting Actress and received an Academy Award nomination.

She had a highly publicized marriage to Tony Curtis, which ended in divorce in 1962, and after starring in The Manchurian Candidate that same year, Leigh scaled back her career. Intermittently, she continued to appear in films, including two films with her daughter Jamie Lee Curtis, The Fog (1980) and Halloween H20: Twenty Years Later (1998). She passed away on October 2004 at age 77, following a year-long battle with vasculitis (an inflammation of the blood vessels).

And yes, she refused to take showers for decades after making Psycho, until she became physically unable to use a bathtub.

Not related to Vivien Leigh, who also used "Leigh" as a stage name.