Film / Night of the Lepus 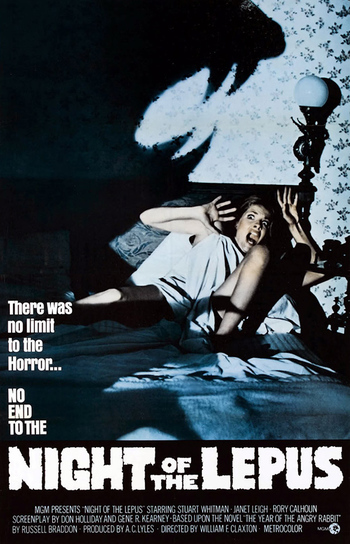 A 1972 film directed by William F. Claxton, it tells the story of how Dr. Elgin Clark (DeForest Kelley sporting an extremely orange turtleneck) helped Roy (Stuart Whitman) and Gerry (Janet Leigh) Bennett, along with rancher Cole Hillman (Rory Calhoun) save the world from a herd of Giant Killer Bunny Rabbits.

The premise is that experimental hormone injections, intended to stop the rabbits breeding as an environmentally-friendly form of pest control, actually cause them to become homicidal. One dosed-up bunny escapes into the wild and starts breeding with the local population. Suddenly there are hordes of killer rabbits running around.

Not to be confused with The Nasty Rabbit

starring Arch Hall, Jr. and written by Arch Hall, Sr., which revolves around a Communist plot to release rabbits infected with a deadly bacteria into the United States.