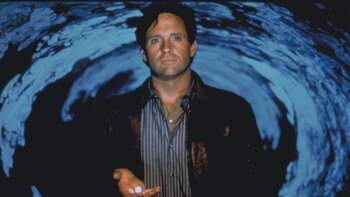 Robert Hays as Paul Forrester
Starman is a 1986 TV series, spun off from the 1984 film of the same name. The starman from the film returns to Earth 15 years later, meets Scott, the son he fathered in the film, and spends a lot of time on the run from the government as they search for Scott's mother, Jenny Hayden.