Doing It for the Art 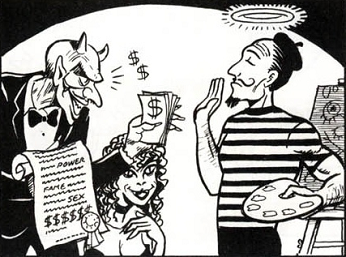 When dealing with media, sometimes it is difficult to overcome the feeling that, however much you may love a TV show, movie, video game, etc., the only reason it exists is to make money. Sure, it might have great writing, acting, animation, etc., but when it comes right down to it, it got produced because someone wearing a fancy suit thought a bunch of other guys wearing fancy suits could make money off of it.

However, there are plenty of people in media who do their work just because they find it fulfilling. Not all of us need money to justify effort. A lot of people are honestly just Doing It for the Art.

Creators in this mode often put far more effort into a project than necessary, so this can go hand in hand with Difficult, but Awesome features such as Cast of Snowflakes, Awesome Art, and Shown Their Work. Indeed, sometimes the amount of work being put in is a little creepy. Sure, it's a great vision and all, but does anybody need that much detail? While plenty of artists will do this even if a paycheck is the motivator, these artists will be the first to admit they stretch their personal limits because that's their only motivation. Remember, though, that the central point for this page is that a work is done for its own sweet sake, even if it is never expected or intended to make money.

This often applies to niche media, since oftentimes, with more popular works, the creators must work with the general expectation that they need to create something to satisfy a large audience above all else.

Now consider that Tropes Are Tools. Doing It for the Art does not equal quality work. If it did, then this page would have been put in the Sugar Wiki a long time ago. Some examples here are of people who genuinely tried, but just weren't talented enough — Sturgeon's Law still applies, regardless of the creator's motives. (In which case this would be some kind of consolation, as in, "That movie sucked, but at least they cared".) Conversely, doing it for money does not equal lack of quality. Indeed, some writers' hackwork is preferred to what they regarded as important stuff, sometimes because doing it for money was the only way they let down their pretensions. Also, if somebody lets their success get to their head to the point where their "vision" hurts the quality of their work, it can quickly slide into a Protection from Editors situation. However, the romantic ideal represented by this motivation can lead to a backlash against creators who are perceived to be doing something solely (or even partially) for reward, possibly by people who assume that doing something for money means you don't put your effort into it for artistic reasons as well.

In film analysis, someone who does a lot of this is called an auteur, as opposed to the metteur en scene, who is the journeyman director who makes someone else's movie. Within the artists' circle, this practice is called "Art for art's sake". Of course, if it does actually make money, well that's just a perk.

The same motive appears in a far less benign (and more explosive) form in For Science!.

Compare and contrast with Awesome, Dear Boy, Money, Dear Boy, One for the Money; One for the Art, and So My Kids Can Watch. Contrast with Pandering to the Base, Propaganda Piece, Contractual Obligation Project, and Creator's Apathy. See also Serious Business, The Producer Thinks of Everything, Shown Their Work, Written for My Kids, and Creator-Chosen Casting.

Important Note: This only applies when creators openly state they prioritize art over profit. No matter how impressive something might be production-wise, a behind-the-scenes factoid or a visual effect is not proof on its own that the creator or production team is Doing It for the Art. This page is not intended for Gushing About Shows You Like. If you are looking for pages to gush about impressive facets of production regardless of motive, please post it on Development Heaven, Awesome Art or Visual Effects of Awesome instead. If you were sent here by an example that better fits any of those pages, please correct the link to one of these and move it to the work’s YMMV page if it was on the trivia page.

Examples from characters in fiction:

He couldn't care less if he's not at the top of the sales charts, as long as he gets to do his own thing. Of course, #2 is still nothing to sneeze at, which he points out to his producer.

He couldn't care less if he's not at the top of the sales charts, as long as he gets to do his own thing. Of course, #2 is still nothing to sneeze at, which he points out to his producer.